Indigenous residents of Ivanovskoye village in Selemdzhinski District in  Amur Region in Russia's Far East are outraged by the plans of a UK based gold mining company to start an open cast gold mine less than two kilometres from their village without their consent. I village gathering held 10 September, they vowed to defend their territories and threatened road blocks to stop the company from carrying out their plans.

On 10 July, the villager had held an initial gathering where they had discussed their concerns regarding the planned gold and its impact on their territory and livelihood. The license issued by Rosnedra, the Federal Agency for Subsoil Resourcesis is valid until 31 December 2037. Prior to its issuing, the authorities had failed to consult with the population.

According to the residents, the extraction of gold ore by open cast mining with the use of explosives just 1.5 - 2.5 km away from a residential area will lead to a deterioration in the quality of the natural environment. "...because the streams and territories [in the concession area] are of vital importance to us, they provide clean water, and they are where we collect wild plants. In the future this [project] will create unfavourable conditions for conducting traditional economic activities of indigenous minorities of the North in the Amur region" (from the declaration adopted by the village gathering).

Representatives of the UK based mining company “Petropavlovsk” together with regionial and district authorities appear to have formed a united front against the Evenks. They claim that they have nothing to negotiate with the indigenous residents, the project is environmentally safe, it will provide Russians jobs and replenish the budget of the country and the region.

Without consent of the indigenous population but supportted by the head of the regional government, Petropavlosk has started to implement the project, which will likely bring irreversible destruction of all life within the concession area. Tens of thousands of tons of explosives, bulldozers and excavators will be turning the Evenk taiga into a lifeless moonscape. 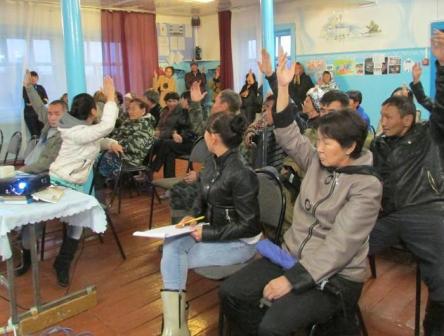 On 10 September 2015 the Evenks have held a village gathering to decide on their position. This time, both the authorities and MC "Petropavlovsk" ignored the residents and failed to attend.

Faced with the end of dialogue by their opponents, the village has given "Petropavlovsk" ten days to terminate all industrial operations in the vicinity of the village and demanded that an environmental and ethnological expert review be carried out.

The end of the resolution rings a defiant tone: "We reserve the right to defend our village and our territories through all lawful means". As explained by the activists over phone, the residents are very determined and consider the possibility of blocking the highway on which the multi-ton trucks deliver ore to the gold-extraction plants of LLC "Albinski mine".

In 2012, protesting residents of the Ivanovo had already achieved the cancellation of the license of LLC "Khergu". Back then their action caused a resonance at the Federal level, because they decided to boycott the presidential elections.

On 11 September 2015 in the regional capital Blagoveshchensk one-man pickets (the only form of protest not requiring prior approval) were held in front of the building of the regional government  in support of the inhabitants of Ivanovo.