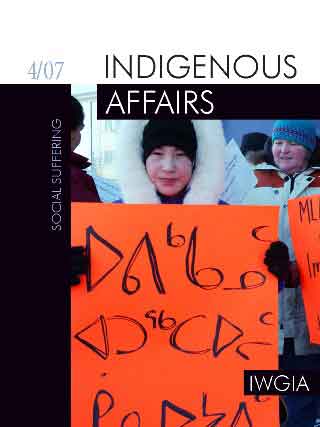 The theme of this issue of Indigenous Affairs is Social Suffering. It brings articles about issues such as diabetes among indigenous peopels, the situation of the San people in Southern Africa, the situation in Lao PDR, suicide among the Inuit youth, and the aboriginal affairs in Australia. Content: Editorial By Jack Hicks The Intergenerational Transmission of Historic Trauma and Grief. By Cynthia C. Wesley-Esquimaux Diabetes - A Serious Threat to Indigenous People. By Ida Nicolaisen Structural Violence and Social Suffering Among the San in Southern Africa. By Renée Sylvain Development Induced Resettlement and Social Suffering in Lao PDR. Anonymous author The Social Determinants of Elevated Rates of Suicide Among Inuit Youth. By Jack Hicks A "National Emergency" in Australia: The Howard Government's Intervention in Northern Territory Aboriginal Affairs. By Melinda Hinkson Finding Answers to Suicide Within Aboriginal Communities: The Yarrabah Story. By Penny Mitchell
Download publication